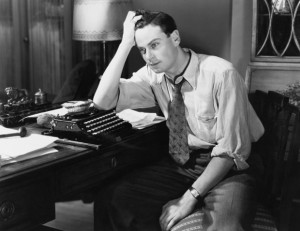 This article originally appeared on Sonicbids.

“I only write when inspiration strikes. Fortunately it strikes at nine o’clock every morning.” – William Faulkner

Many of us in the creative world are under the false and dangerous assumption that creativity begins when inspiration strikes. Sure, you may occasionally wake up in the middle of the night with a brilliant idea that just popped into your head, but more often than not, creativity is something we encourage through discipline and hard work rather than something that strikes like lightning. So if you feel like you have a case of songwriter’s or composer’s block, instead of waiting for inspiration to strike, use some of these exercises to stimulate your creativity.

1. Use your eyes to guide your ears

Visual images can be great catalysts for lyrical images or sonic textures. Whether it’s a film, a painting, or a sculpture, a work of visual art can stimulate all sorts of musical creativity.

Take the latest Radiohead song, “Spectre,” which was written as a title theme for the James Bond film of the same name but never used. The song perfectly captures the dark, ominous feel of the movie, taking the band in a new direction, but still sounding like Radiohead. Why not try your own hand at writing a Bond theme? Or if Bond isn’t your thing, try watching a visually inspiring film with the sound off and let images take you on a musical journey as you create your own soundtrack.

Stories from films can also act as great songwriting catalysts. If you’re stuck for lyrical content, try telling a story from your favorite movie (or book or TV show) from the perspective of one of the characters. The act of trying to inhabit the life of a different person in a different situation (either real or imagined) can take your brain to new and interesting places.

3. Try writing in a genre you’ve never written in before

One of the tricks he uses to reach this “open state” is to try things outside of his comfort zone with an open mind. For example, if you don’t like bluegrass music, you would never choose go to a bluegrass concert. But by going to a bluegrass concert with an open mind about what you’re hearing, you might discover things about bluegrass that you really love, or at least things that you could apply to the type of music you write. Similarly, by trying to write in a genre outside of your own, you may come across unexpected pieces of inspiration that take you in a new musical direction.

4. Write or improvise first thing in the morning

Another tip Usher offers is spending the first few minutes of every day coming up with creative ideas. Even though it may feel like all you’re able to do when you get out of bed is locate the coffee maker, your mind is actually in a prime creative state during this time. You know that internal editor that lives in your head and tells you that your ideas suck? It often takes a while for that editor to wake up, which is a good thing, because sometimes your internal editor stops you from going down creative paths that are actually useful and interesting. This makes the morning a great time to sit down and write music or simply improvise on your instrument.

Make sure to keep track of everything you do, either on paper or on a recording device, so you can go back later when you feel more awake and mine all of the good ideas from these spontaneous creativity sessions.

5. Try a new instrument or a new tuning

Becoming an expert at your instrument is important for being a good musician, but sometimes all of that technical knowledge can get in the way of creative expression. There’s a childlike joy that comes from playing a new instrument for the first time, and sometimes that sense of childlike exploration can lead to real inspiration. If you’re a guitarist, you don’t even need to try a new instrument to jog your creativity; just put your guitar into a random new tuning and see where your fingers lead you. Since you can’t rely on muscle memory anymore, you won’t get stuck playing the same riffs and phrases you tend to fall back on in standard tuning. Instead, you’ll open up a whole new harmonic and melodic language.

If you want to become a better songwriter or composer, you don’t necessarily have to start creating at 9:00 a.m. every day like William Faulkner did, but you do have to get out of the mindset that creativity is something that simply falls out of the sky. If you’re disciplined about your craft, you’ll stop seeing creativity as something exceptional and begin to see it as something ordinary. Sure, your ideas can be extraordinary, but you don’t have to wait until you reach an extraordinary state of mind to achieve them. Instead, make the extraordinary part of your ordinary life.

Casey van Wensem is a freelance composer, musician, and writer living in Kelowna, B.C., Canada. You can hear his musical work at birdscompanionmusic.com and read his written work at caseyvanwensemwriting.com.